Bosnia-Herzegovina is considered to be the European country with the highest contamination from explosive remnants of war. Although the war in Bosnia-Herzegovina (1992-1995) dates back a long time, the consequences are still noticeable. The remnants of war prevent the use of agricultural areas that would be enormously important for the further socio-economic development of the country.

World without Mines has been active for many years in the municipality Donji Vakuf and the implemented mine action activities had an substantial effect to the further socio-economic development in the community. Since 2017 WwM has been implementing mine action projects in the area of Gornji Vakuf-Uskoplje. We supported the clearance of 2 to 3 minefields per year. All projects were selected, coordinated and monitored in cooperation with the national Mine Action Centre (BHMAC). The focus here was on demining areas that are essential for meeting the needs of the affected population, e.g. farmland. Furthermore, mine risk education activities were organised for selected target groups. Every year, the demining of mines could release around 100,000-200,000 square metres of valuable agricultural land for safe use. 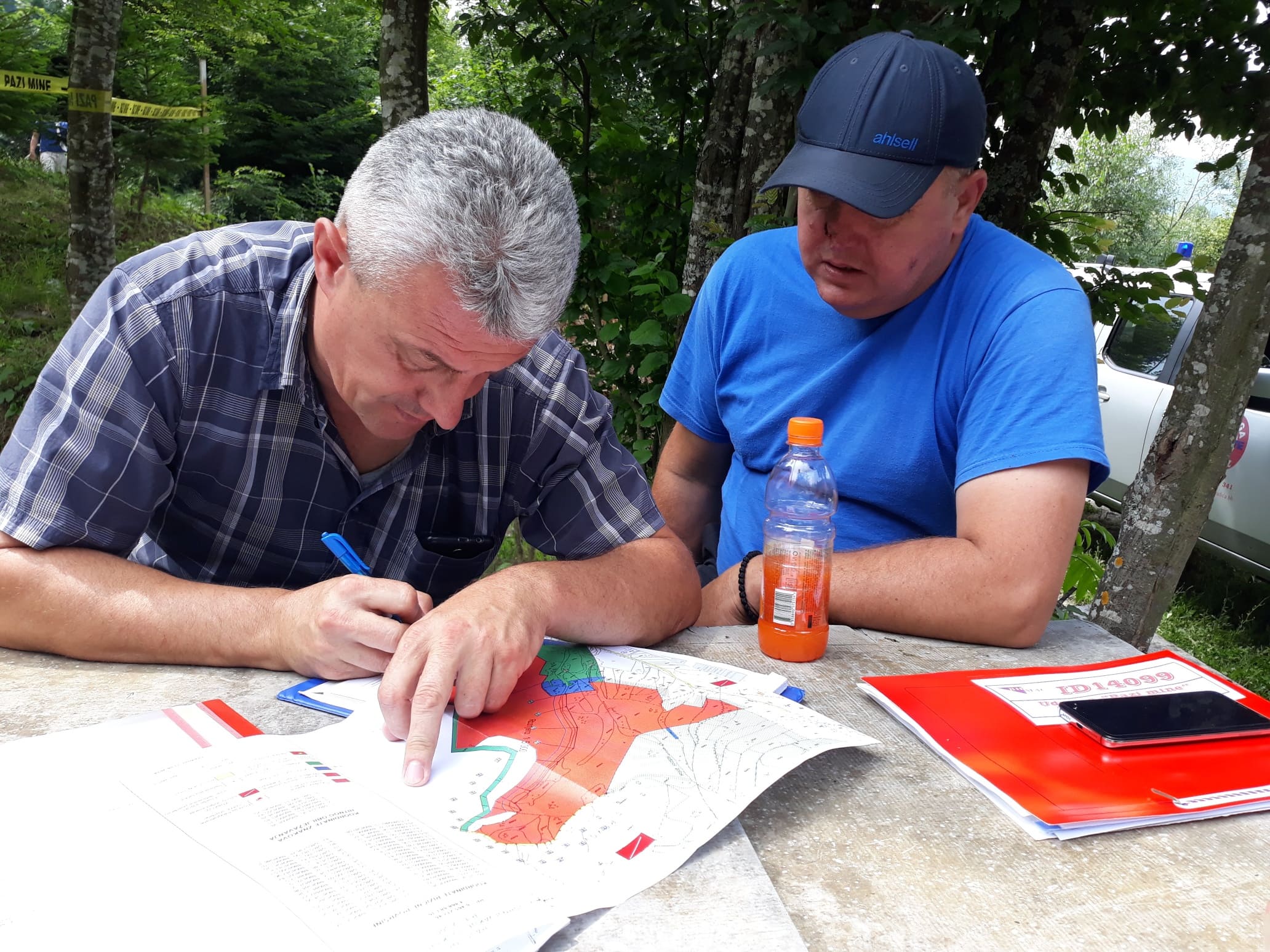 Operational planning of mine clearance in Bosnia-Herzegovina 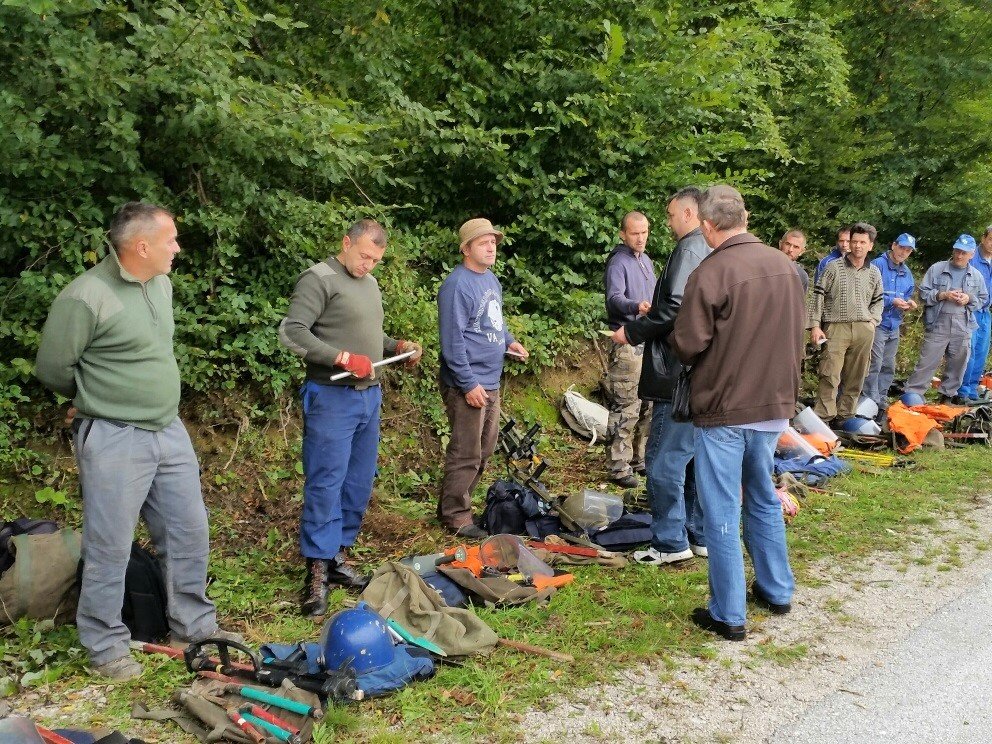 SMART System for Mine Detection Dogs

Dogs are able to smell explosives from a distance of several metres, even if they are 30 centimetres below the ground. But to allow the dog and its handler to work, the ground had to be cleared of vegetation and divided into small sections. The dogs also had to be kept on a lead.

The SMART dog harness, proposed an entirely new methodology to permit more effective deployment and use of MDD in technical survey, using free-running operating dogs. The specially developed portable systems include a camera, a GPS and a WiFi system and are strapped around the dog like a rucksack. The dog handler monitors all the dog’s movements on a smartphone and registers where the dog indicates it has found a mine. The dogs are never exposed to danger during mine detection, as their weight is too low to cause mines to detonate. Ideally, the implementation of the SMART systems could make mine detection up to 50 percent cheaper.

The SMART system represents Swiss innovation. It has been developed by the Geneva International Centre for Humanitarian Demining (GICHD) in collaboration with Digger DTR in Tavannes. World Without Mines is impressed with the efficiency of the GPS technology and is supporting the first SMART systems. 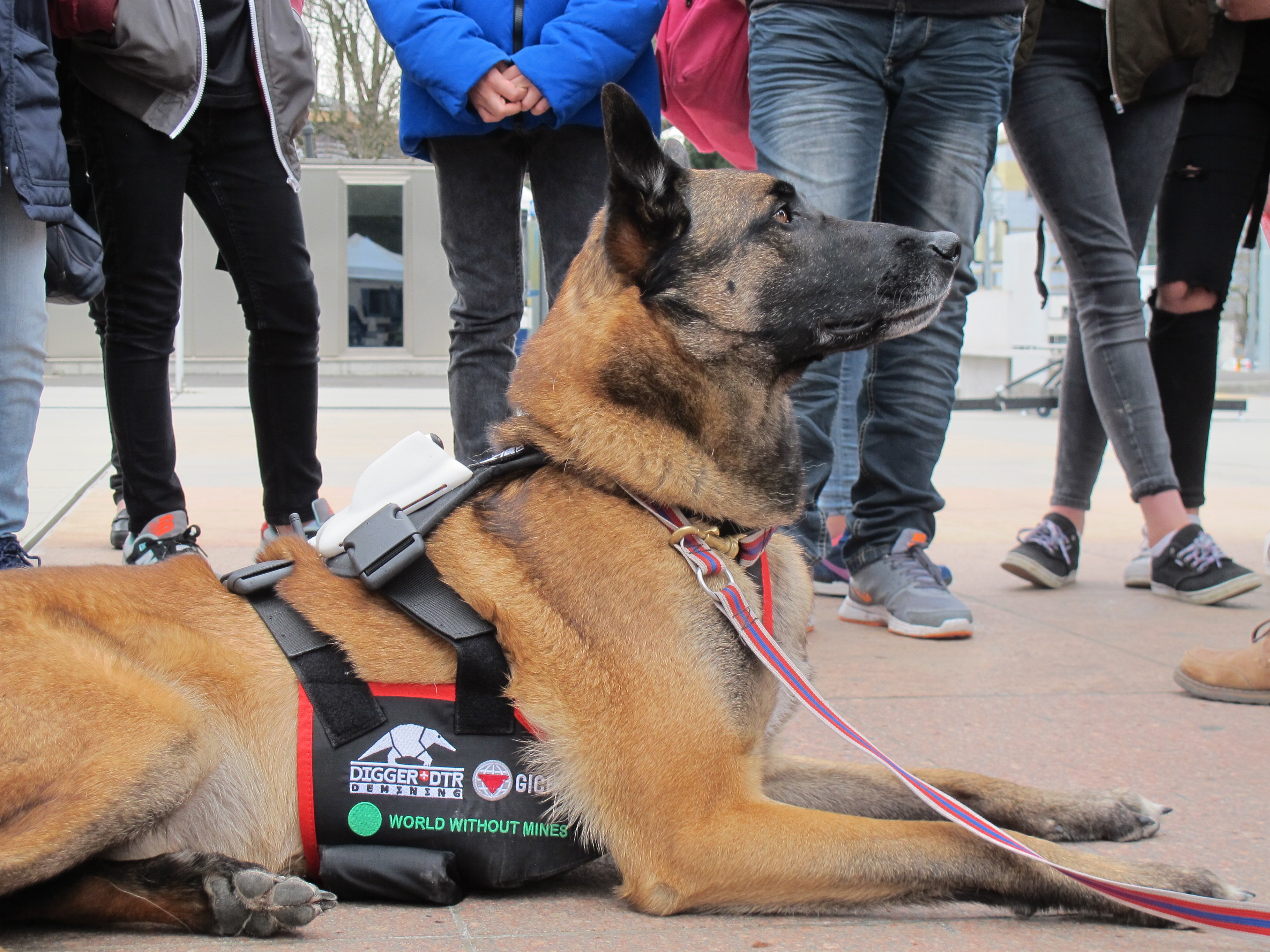 A dog demonstrating the SMART -System 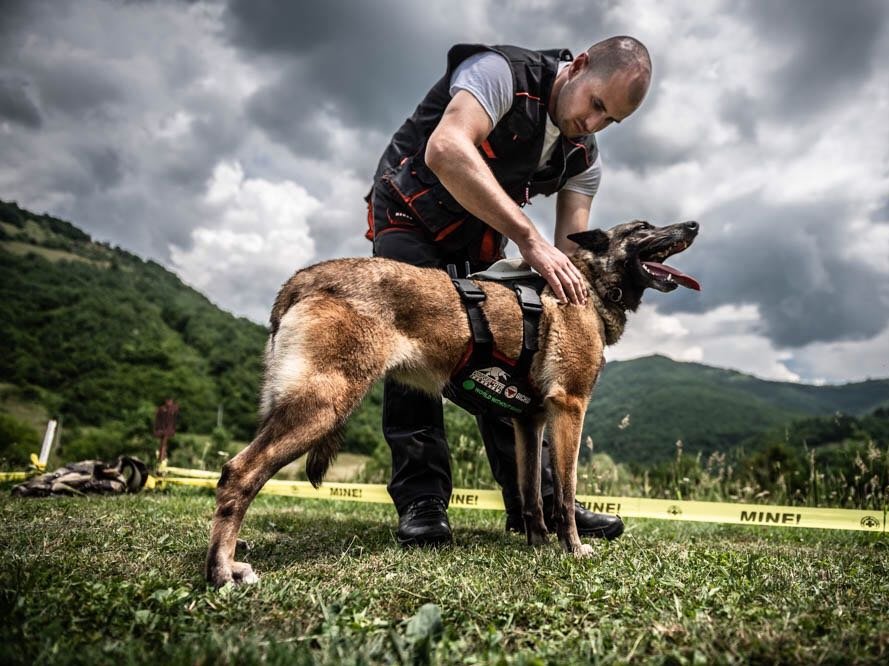 The dogs are specifically trained

The dispute over the Nagorno Karabakh region in the South Caucasus has been going on for decades. World Without Mines worked with The HALO Trust in Nagorno Karabakh. An eight-man demining team systematically cleared the contaminated area of 862,000 m2 around the two villages of Nerkin Horatagh and Mokratagh. A second team, consisting of five members, carried out immediate operations at the request of land users to remove sighted explosive ordnance and also sensitised the affected population to the existing danger. 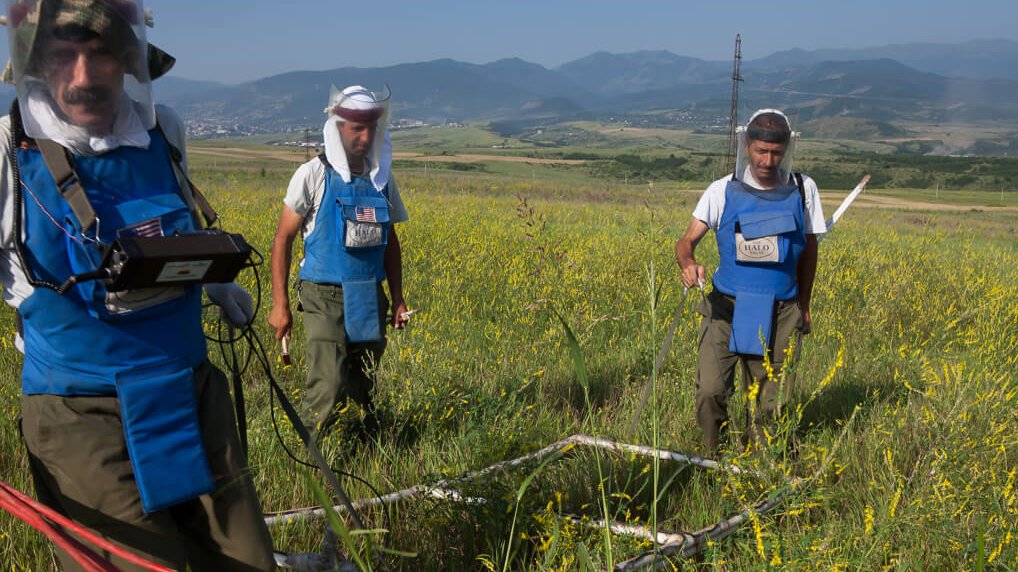 Three members of the team in Nagorno Karabakh

The Republic of Somaliland is an autonomous region in north-eastern Somalia. In 1991, Somaliland unilaterally declared its independence from Somalia, but is still considered internationally as part of Somalia. Somaliland is very poor and its population often suffers from hunger. As a result, tens of thousands of people store unexploded ordnance from the border wars with Ethiopia in their homes or barns. The population collects the mines and projectiles from the war and hopes to be able to sell them - often the population is not fully aware of the danger this poses. There is therefore an urgent need to raise people's awareness of the risks.

In cooperation with our local partner, the Danish Demining Group (DDG), numerous risk education workshops have been organised for the civilian population between 2011 and 2013. As the training team was mainly composed of local staff, it was able to quickly gain the trust of the villagers. Many ammunition depots were handed over by the villagers and were professionally disposed of by the WoM team. 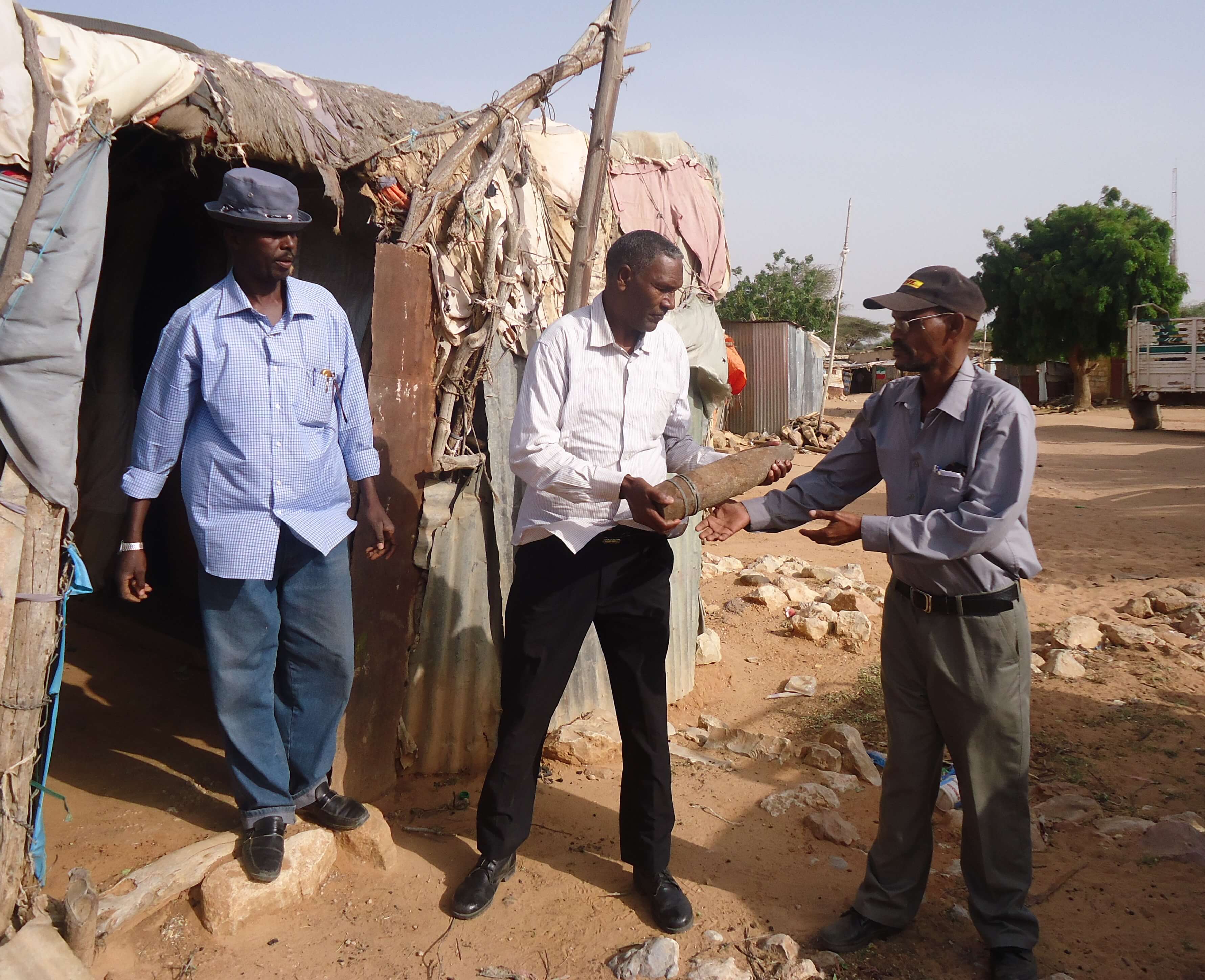 Somaliland: Disarmed ordnance remnants are removed from a private home

Burundi is the most densely populated country in all of Africa and one of the poorest countries in the world. Since the 1970s, several conflicts have left behind numerous landmines and explosive remnants of war. World Without Mines supported the work of the FSD (Fondation Suisse de Déminage) and the MACC (Burundi Mine Action Center). A total area of 23,038 m2 was cleared. The project also included risk education workshops for the local population and refresher training in first aid for the demining teams.

The dispute between Armenia and Azerbaijan over the Nagorno-Karabakh region led to the first bloody clashes in 1992. The conflict has left the border region heavily mined and contaminated with explosive remnants of war. World Without Mines supported an Emergency Response Team (ERT) in Azerbaijan, which consisted of particularly highly qualified deminers from the "Azerbaijan National Agency for Mine Action". Between 2007 and 2008 the ERT cleared an area of 778,855 square metres. A total of 49 houses, three gardens, three school buildings and their surroundings were cleared of explosive remnants of war. 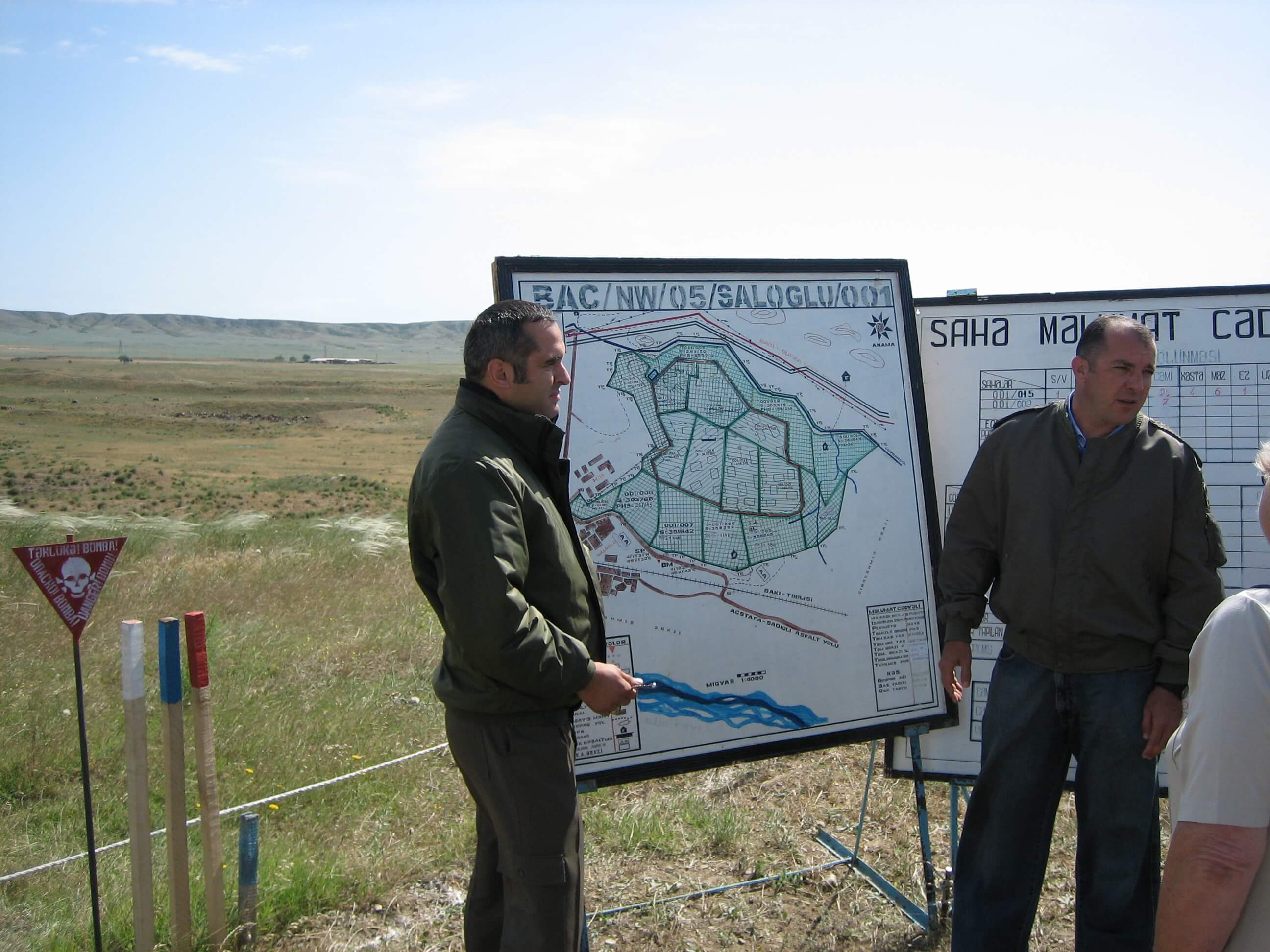 Azerbaijan - The demining team at the briefing

Material for demining a school site, 2004

From the 1960s to 1998, various groups fought bloody battles for power in Cambodia. To this day the country is heavily contaminated with mines and war ammunition remnants.
In 2004, the Foundation World Without Mines received an enquiry from CO-OPERAID, which wanted to build a school in Cambodia. However, the area had to be demined first. World Without Mines financed material for the demining organisation MAG (Mine Advisory Group) to a total value of CHF 36,000.

Between 1977 and 1992 Mozambique suffered from a civil war. As a result of years of conflict, large parts of the country were contaminated with mines. Today the country is considered mine-free. Until 2011, World Without Mines operated a branch office in Mozambique in order to better coordinate and monitor the work on site. 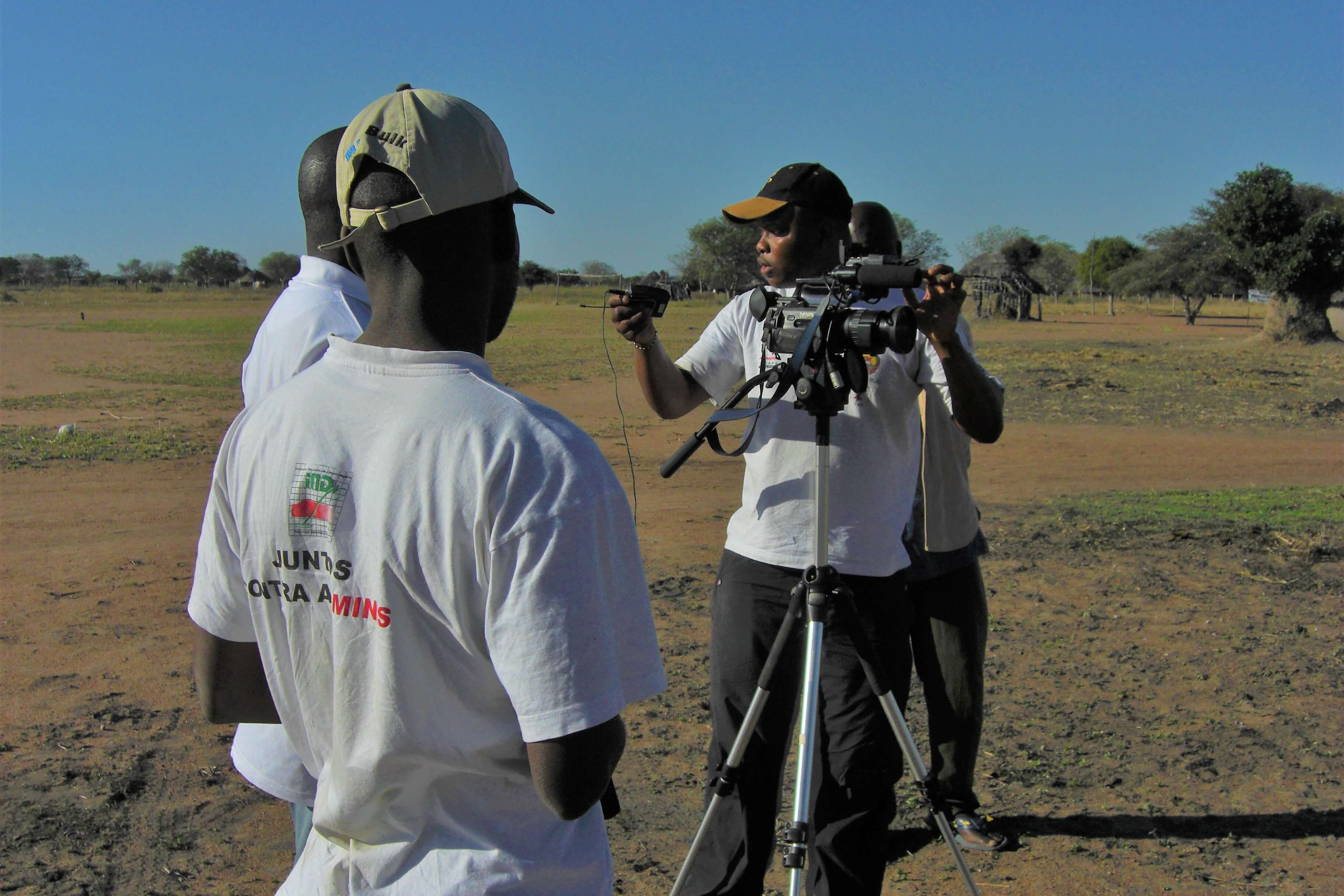 Mozambique: The film team at work 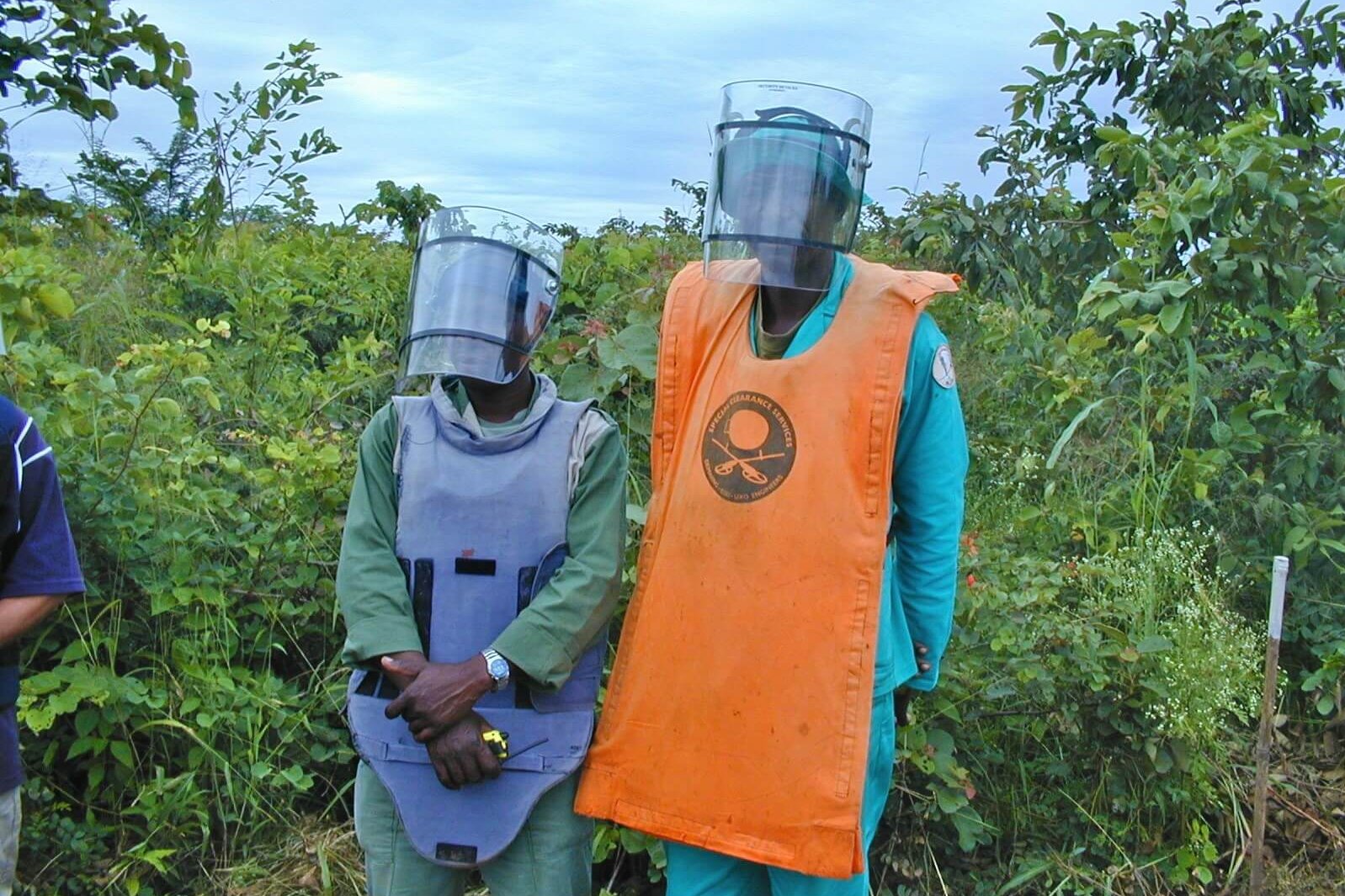 World Without Mines supported the activities of the Swiss Federation for Mine Action by financing one truck and four other vehicles.

World Without Mines informed authorities, media, organisations and the Swiss population about the situation in mined areas through press work and various activities.

Technical development of a demining machine, 2004-2006

The organisation Digger DTR, Tavannes, is active in demining. A group of young, enthusiastic engineers spent months of work, some of them unpaid, to develop a demining device that is more manageable and more resistant to shock waves than those previously known. World Without Mines supported the project with CHF 25,000.