Risk education and mine clearance | Project duration: since 2015 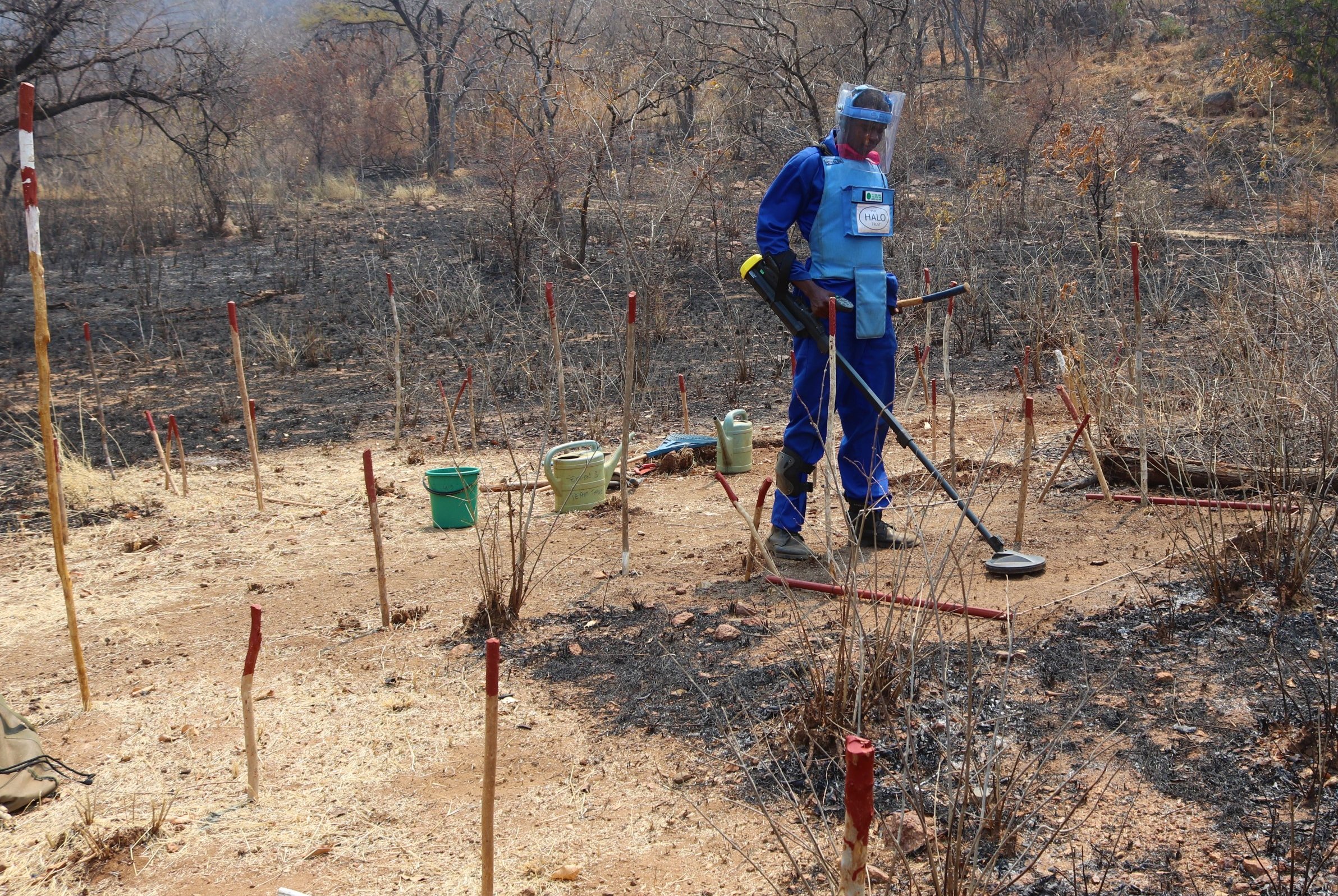 A deminer in action: When searching for mines, one has to proceed in a very systematic and concentrated way - metre by metre the land is scoured for mines. 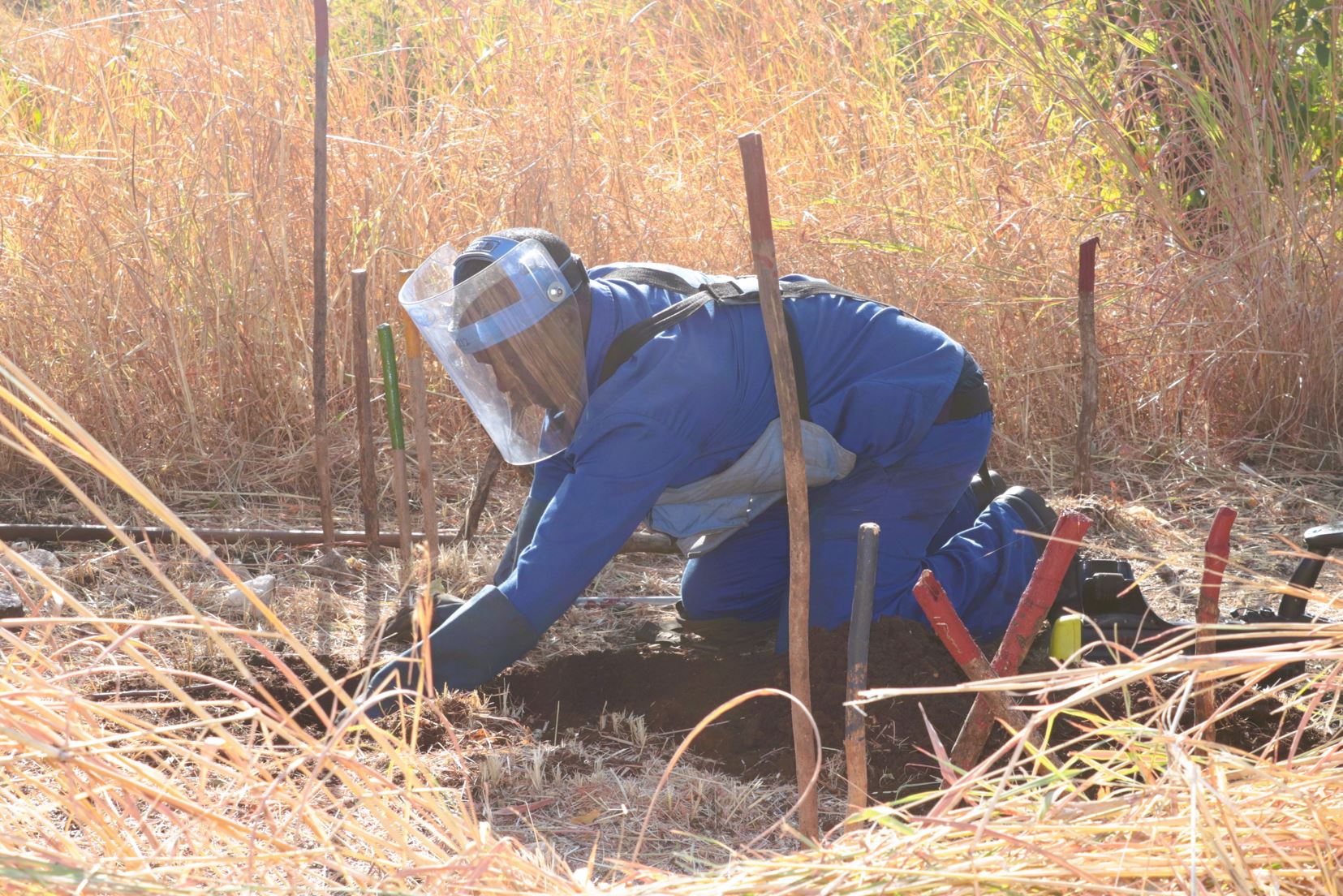 When a mine is found, utmost caution and concentration are required. The strict training and controls ensure that mine finds are removed safely. 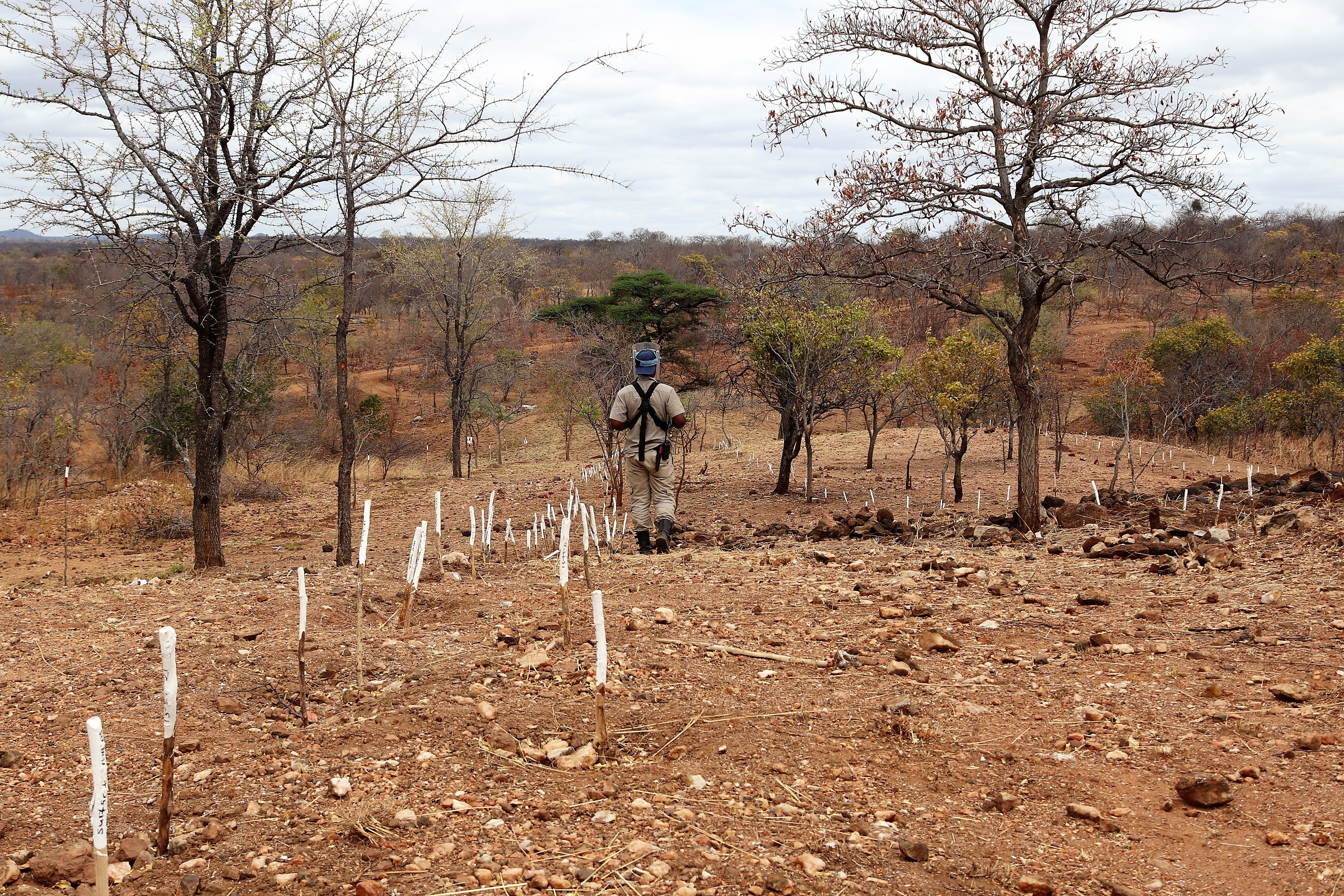 A deminer walks the field again after complete demining.
The white sticks show where mines were found and destroyed. 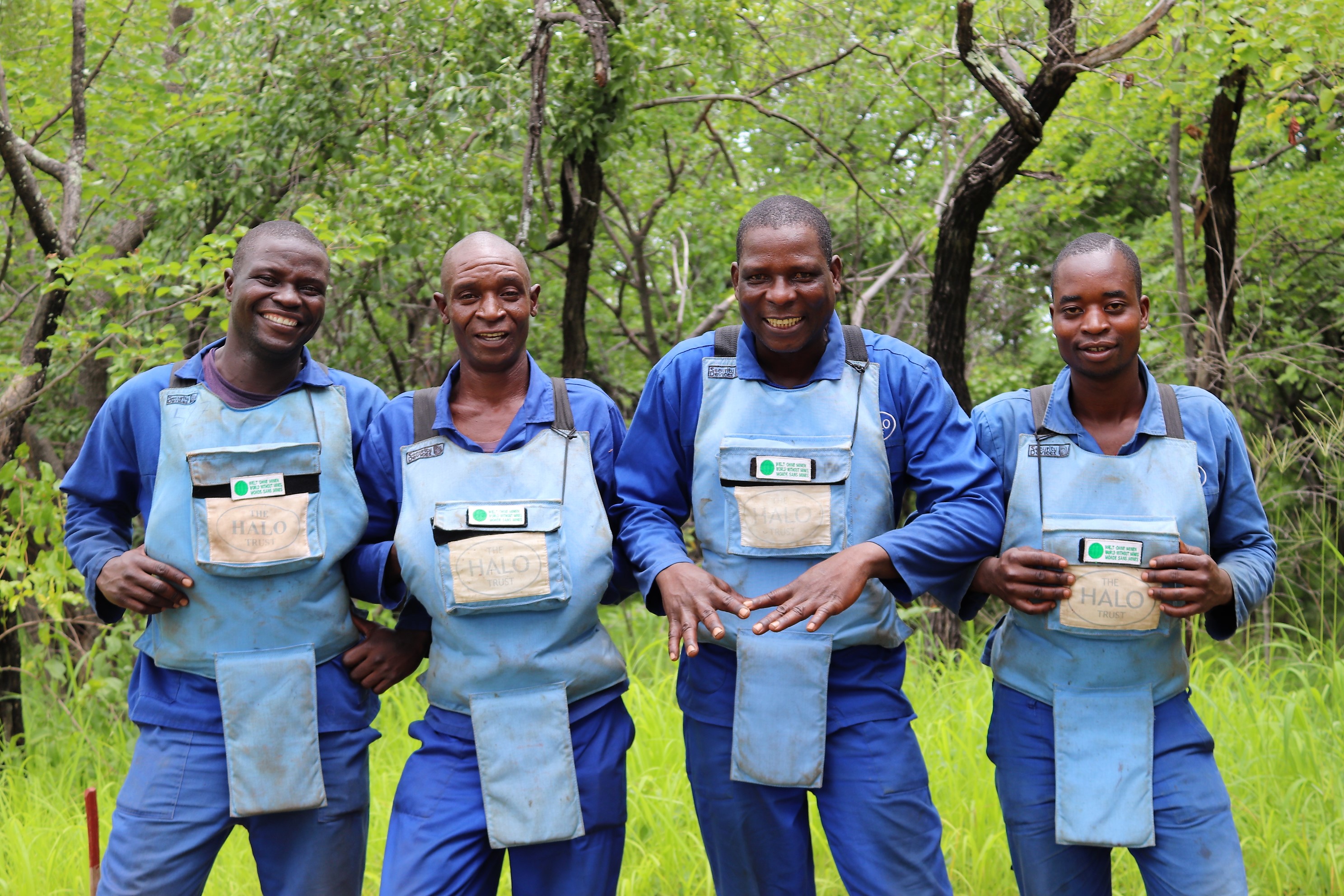 For some of the WwM-team, being employed as deminers has been a positive turn in life, as they now receive valuable education and a regular and fair income.

Case Story: I have one of the most rewarding jobs in the world!

Jackson Mabhandi is one of our group leaders in Zimbabwe. His path there, however, was very difficult.

As a child, he lost his beloved sister in a mine accident and shortly afterwards his mother died. He then grew up with his grandparents. His grandparents barely made ends meet as they took care of nine other children. In his third year at high school, Jackson had to drop out and help provide for the family. He worked various informal jobs until HALO started cleaning up their area.

The job as a deminer was, as Jackson called it, a "game changer". His life changed immediately. Not only was Jackson able to provide a better life for his family than he had been living, but he was also able to contribute to the safety of his community, something he was passionate about.
"I came face to face with the very same device that had taken my sister from me. I would stop at nothing to make sure that no more lives would be lost. I have one of the most rewarding jobs in the world!" says Jackson Mabhandi today.

3,060 anti-personnel mines were identified and disposed of.

It has been possible to release 39,402 square meters of land for use.

301 people now have safe access to land and infrastructure again. 331 local residents (including 260 children) have been made aware of the dangers of landmines and have learned safe behaviour.

On the 12th of November 2021, Zimbabwe took a major step on the road to finally removing the last remains of its war of independence when the first entire district on its mined border with Mozambique was declared mine-impact free and handed back to the local community.

This declaration marks a significant milestone in Zimbabwe’s national effort to achieve a “Landmine-Free Zimbabwe by 2025”. Mount Darwin is the first such district to reach this status, with 11 districts still containing landmine contamination. It is World Without Mines' fervent hope and belief that in the coming years more and more districts will reach the same status, and our efforts are dedicated to reaching this goal. 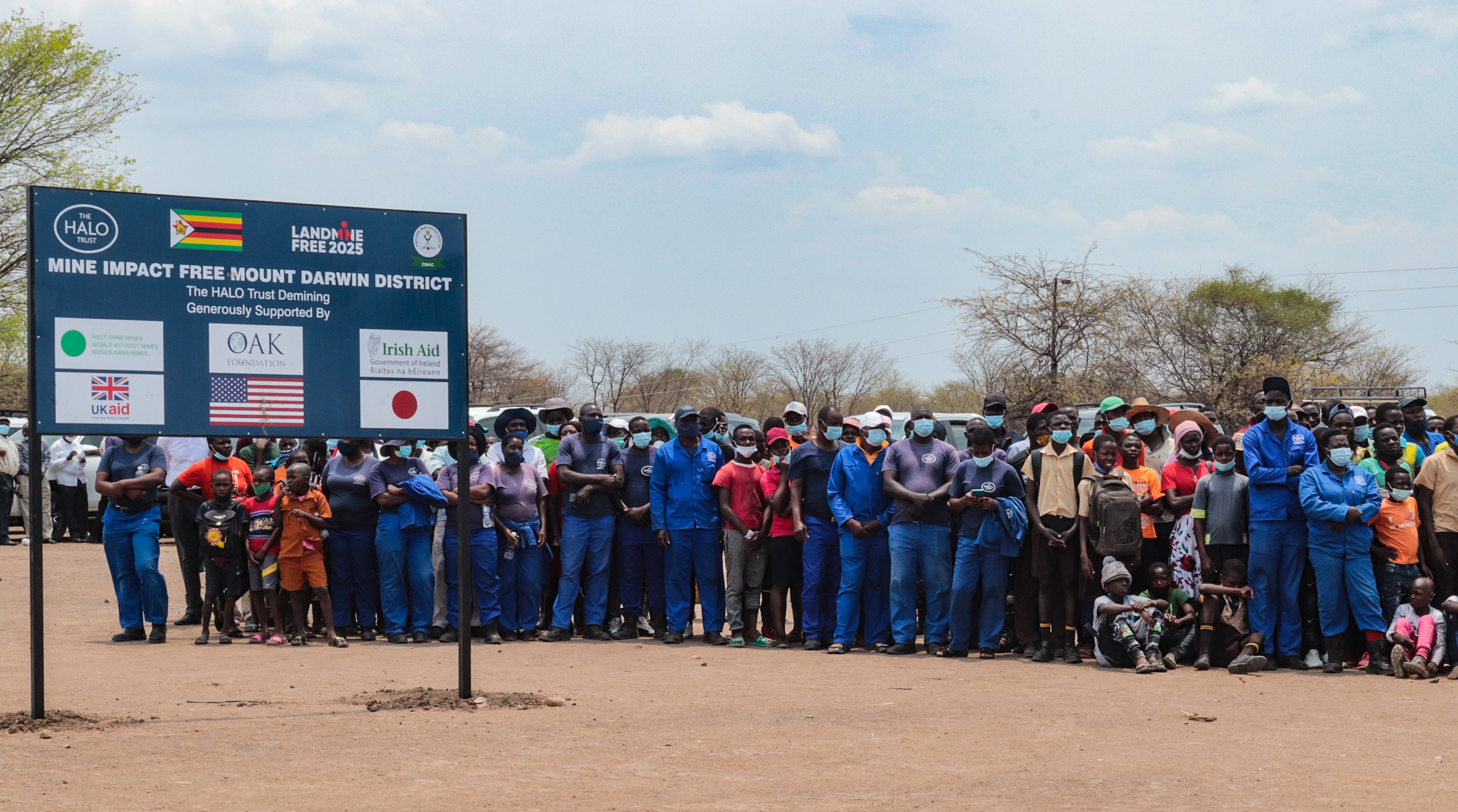 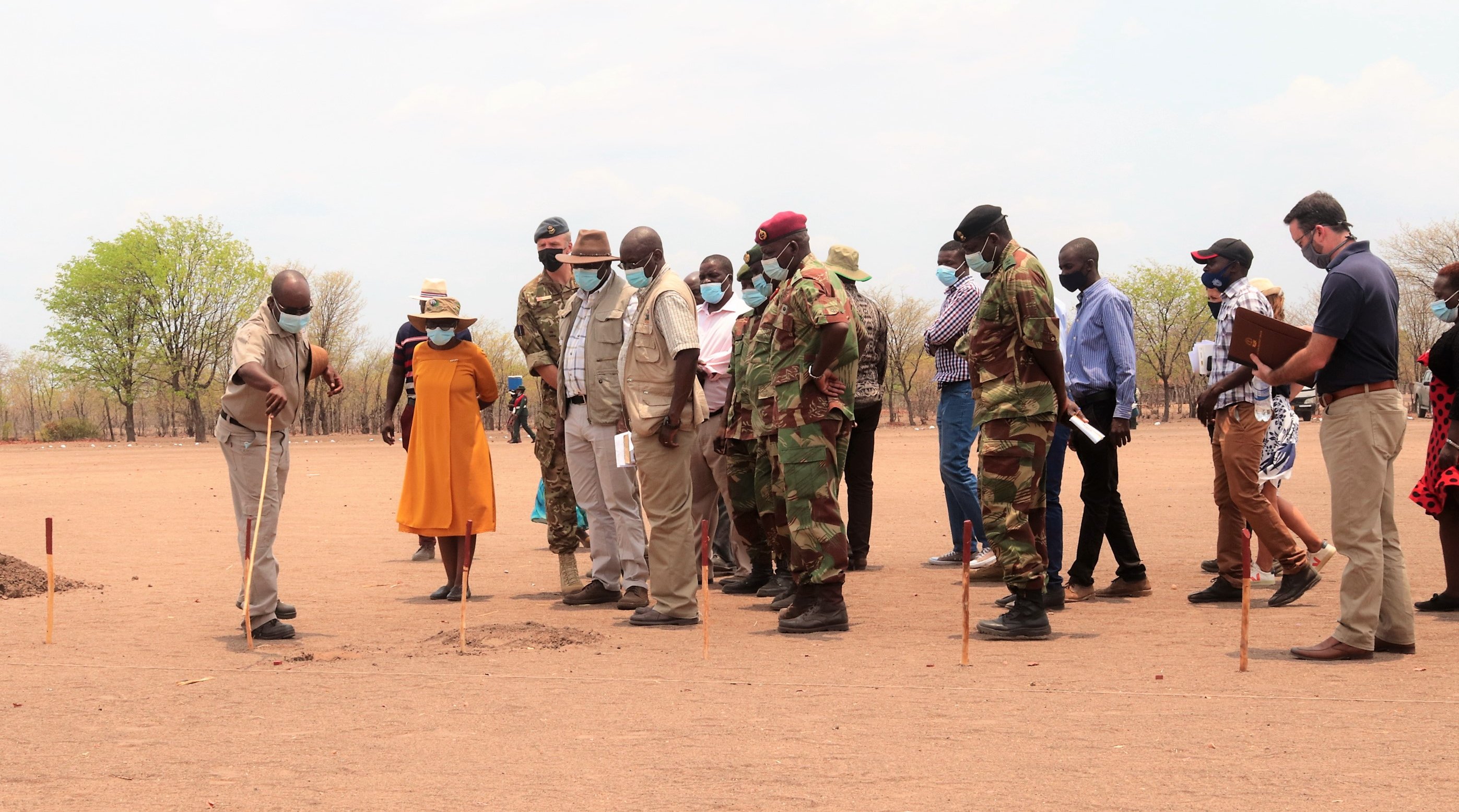 Demonstration of the demining work in front of the guests